Resistance bands are among the easiest equipment when it comes to home (and gym) workouts. They can be used to work out various parts of the body easily and safely while saving on money and time.

For the most arm benefits from your resistance bands, perform the following exercises:

This workout targets your biceps with a toning effect besides building stability and strength in your hands. You’ll need a chair or other item to sit on. Follow these steps to perform the exercise:

This routine should be repeated between 10 to 15 times for one hand before switching. Don’t rush as the best benefits are attained by doing it at moderate speed.

Overhead band stretches help you build strength and flexibility in your arms and is a simple exercise to perform. The steps are as follows:

This exercise aims at building your chest and biceps muscles. It’s carried out as follows:

This workout targets your chest, shoulders and triceps muscles. As from its name, you’re basically pulling on a bow with your band. It’s done as follows:

When done right, this workout will work on your shoulders, back and triceps. To perform it, you follow these steps:

Repeat for between 10 and 15 reps then switch to having the right foot in front.

The simple band lat pull, also called the band pull apart, focuses on your shoulders and the back. It’s performed as follows:

For toned arms and shoulders, the band forward raise routine will quickly get there. It’s done as follows:

Perform between 10 to 15 reps then change the foot forward.

Perhaps the most complex workout on this list, the single-arm lateral raise with static hold focuses on toning your chest, back and shoulders. It’s done as follows:

This one should also be performed for 10 to 15 reps.

Another workout focused on your shoulders and back, the band upright row is almost similar to the band forward raise. It’s done as follows:

Perform 15 reps for this exercise.

This workout is quite similar to the band pull apart workout and works on your back, biceps and shoulders. It’s also performed in an almost similar manner as follows:

These workouts are simple yet, if done right and often enough, will give you great arms. You should also take note that such exercises need to focus on slow and steady reps rather than fast ones.

To make the most of these workouts, you need the best quality resistance bands for your workouts. These five have the best balance of features and pricing for your needs:

As you may have noticed, some are sold as sets of bands to allow you increase the resistance for your arms or legs by using more of them at once. 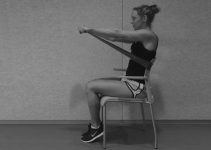 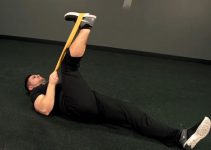